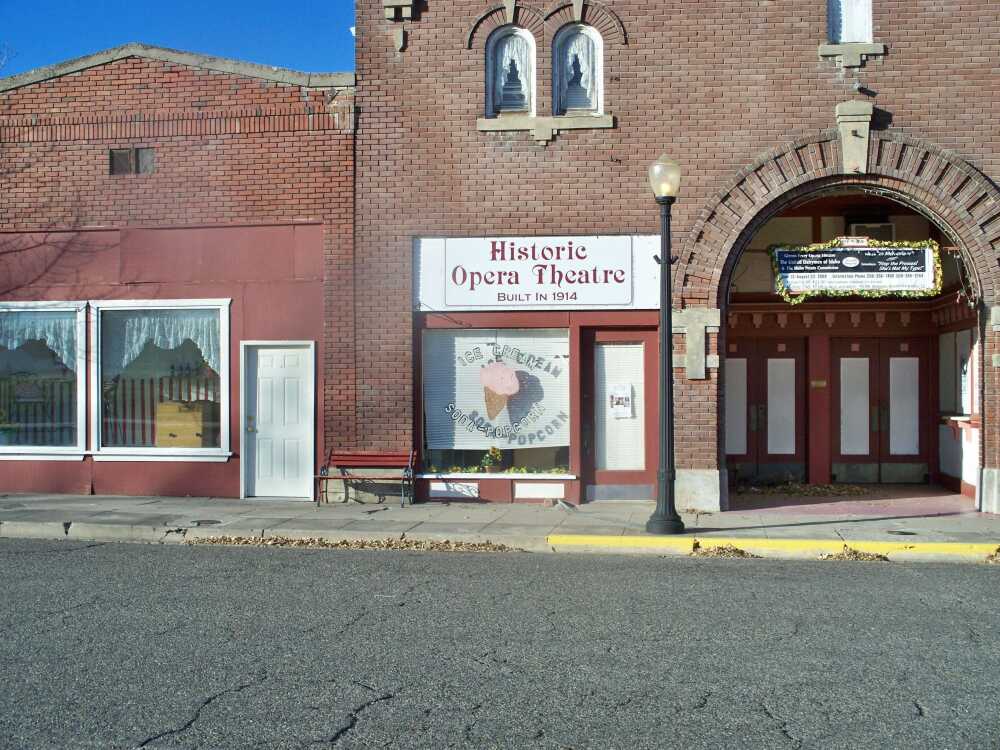 The former pizza shop was next to the Opera Theatre.

I am writing a couple short stories about myself that will either make you want to throw tomatoes at me or make you chuckle.

After my last challenge from Kitty Lover, I decided to write about some odd jobs that I did or other memories that are almost too short for a blog. She seemed to think that I was getting a little stale on the subject matter of my blogs.

When my children were young, I decided to seek a part time job at a pizza place next to the Opera Theater in Glenns Ferry.

The owner has made it into a destination for young people and offered some fantastic pizzas. My first training day went okay. All they had me do was the toppings and get familiar with the oven. It was a little higher than my height to get the pizzas out, but I figured no problem.

After two days of training, the weekend was approaching. The manager wanted to go party at the Trophy Club and the owner was busy doing something else.

Everything started out okay, the first pizza came out a little messy, but still edible. The 2nd pizza collapsed and half of it remained in the oven. I called the owner and told him about the current state of affairs. No problem, he said, just use the 2nd oven. By now, there was a considerably large crowd gathering for their pizza orders.

The 3rd pizza came out crust first. The toppings decided to stay put and smoke was coming out of both ovens now and set off the smoke alarms.

Needless to say, there were rumblings in the waiting area from hungry teenagers and I was near to tears. It really was like a Lucy Show, where everything that could go wrong, did.

The owner called the manager from her wild night of dancing, which made her pretty mad. She came over seething with anger, sized up the situation and began to scrape out the ovens and fill orders. I was relegated to the task of grating cheese. I guess that they figured that I couldn't do any more damage to the inventory that way.

At closing time, the manager still wasn't speaking to me and so I figured that I would be fired on the spot. But the owner was a little sweet on me and refused to fire me. His comment to the both of us was. "Some people can't take pressure". And really, the only pressure that I was feeling by that time was the manager's blood pressure.

That night,I went home considerably humbled, my pizza career was over. On the next day, I went back to offer my resignation and the owner was kind enough to accept it.

My Short Trip to Canada:

In 1987, when I was living in Post Falls Idaho, I decided to take a drive to Canada. My mother was appalled and apprehensive that I would dare to take on such a dangerous adventure. Young women were disappearing everywhere during that time and so her fears were pretty valid.

But me being the fearless 20-something decided that I needed an adventure and Canada seemed like just the trick. So I set off in my 1975 Olds Omega with only a vague idea of where I was going, just following the road signs to the border.

I had the mistaken notion that I was headed to Alberta, but in reality, I was crossing the border into British Columbia. My first clue that I was an airhead was when the Canadian Guard welcomed me quite warmly, "Welcome to British Columbia Canada!" My reply after the initial shock was: "Can I have a map please?"

I drove for about an hour and a half on the Canadian side before taking the road to the next border crossing. Being in British Columbia instead of Albert had me so disoriented, that I decided to get my geographically challenged self back on American Soil.

At the border crossing, the guard asked me, "How long I had been in Canada"? "Oh about an hour and a half", I confidently replied. "Did you purchase anything or did anyone give you anything?", she asked. Just this map and I picked up a couple rocks, I answered honestly".

The next thing that I knew, my car was being searched from top to bottom. My suitcase was opened and my tires were checked pretty thoroughly. After a few minutes of intense scrutiny, I was allowed to leave Canada. I almost kissed the ground when I crossed the American border in my trusty car.

Later on, someone explained to me that they probably thought I was transporting drugs or other illegal goods.

My trip was not a total bust. I put British Columbia on my Travel Resume. I was able to see some beautiful country while traveling along a two-lane highway and my cousin Cindy, who lived in Kettle Falls, gave me a place to stay for the night.

As ditsy as I am, there are other stories about "scenic routes" that I have taken over the years. I love going to new places and my sense of adventure has not been dampened by a few minor "mishaps".

My pizza career ended before it even got off of the ground. I wasn't too sad about that. My dream of a wonderful time in Canada turned out to be a blessing in disguise. My stay was short and it could have been spent in some detention facility for the directionally challenged.

If these stories receive good feed-back, I will share some additional ones about my ditsy little self in future blogs.

Miss Kitty, I hope that you are not like Queen Victoria and don't have a sense of humor because whatever I have to offer will always be a mixed-bag.

I appreciate all feed-back and insight, but if you want to throw tomatoes, do it virtually, Missouri is too far away to hit your target.