Home of the Brave-The American Soldier 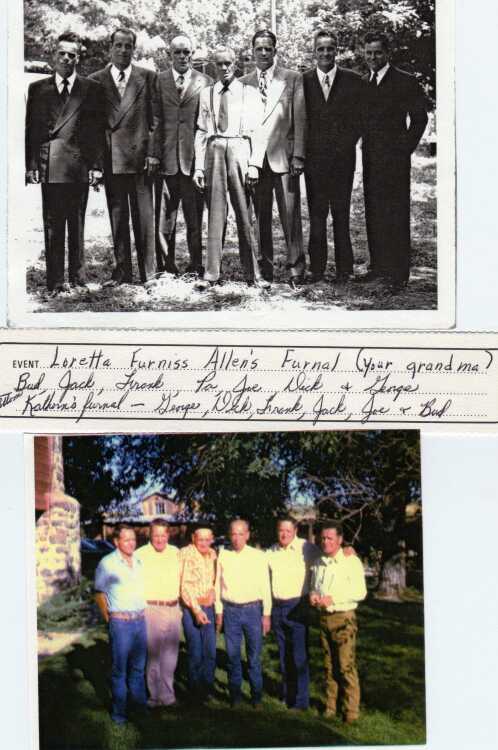 The six Allen Brothers who all served in the military. My dad is the young man on the left hand side of the top picture and on the far right for the bottom picture. It was the last one every taken for all 6 brothers in the 70's.

As Memorial day approaches, I am hoping that people will remember the true sacrifices that America's military has made for our country.

My husband and I love pursuing moments of history together. David loves Civil War trivia, and we both share a great admiration for the men and women who fought in WWII.

The Great Depression has already tested the mettle of this young generation. They had grown up on farms or worked in factories to help support their parents and younger siblings.

I am not sure if I can adequately express how they were able to rise up and become a major force for the European and Japanese Theaters. Some of these young men and women were only in their teens or early 20's and carried the weight of responsibility to keep their fellow soldiers safe in the most dire conditions known to man.

If you can imagine your own 19 or 20 year old leading a group of men into battle, or sleeping within 100 yards of the enemy lines in freezing temperatures. Can you imagine yourself at 25 or so, flying a bomber plane with no promise that you would return from battle or being the gunner and fully vulnerable to enemy aircraft?

Or how about the prisoners of war captured by the Japanese in the Philippines and the death marches that they endured.

Throughout history, men have heeded a call to protect and serve our country. In some wars, they volunteered because of the mistaken thought that it would all be over in a matter of months or because danger had hit close to home.

And then we come to two wars that had no clear victory and left a deep wound in America's history; Korea and Vietnam.

I don't know enough about the Korean War to comment on. I do know that it is a great disservice to call it the Korean Conflict. The serviceman who fought in that war deserve better.

The War in Vietnam was a long and bloody battle. Our soldiers came home to an angry mob of dissenters, who failed in their zeal to recognize the true villains working behind the scenes to prevent a clear victory for our military. If things had been left up to the soldiers on the ground, I believe that the outcome would have been very different.

I was pretty young while the war was ongoing and I again probably will fail miserably in my description of the valor and courage displayed by our American soldiers. We did not bind up their wounds but instead let them fester. We did not give them a parade or joyous welcome home. WE DID NOT acknowledge their sacrifice. These veterans came home to a very changed landscape and there were no yellow ribbons tied to the oak tree for them.

We must celebrate the courage of all soldiers who HONOR their oath and allegiance to America. They are the guardians who stand firm and proud throughout the conflicts of this war-weary world. Their wounds may not be physical ones but deep invasive terrors that wake them up in the dark of night. Their mothers continue to pray for their safety and their spouse keep the home fires burning.

I have talked about finding your purpose in life and some people will spend a lifetime wasting their potential. But a soldier has chosen a vocation that will either break him or make him stronger. He/She will face the onslaught of danger with a renewed sense of calm and will not leave a fellow soldier behind.

The bearer of the Flag is marching in the forefront, if he falls, another will take up his place in the battle and another and another.

On this Memorial Day, take the time to thank a soldier. Most of them will never talk about their memories or the medals that they earned. But their stories are etched indelibly upon their their faces as they stand to salute the Flag and celebrate being an American.