Kim's Comments
Kim Kovac
I've lived in Mtn Home since 1989, so that's...hold on...I'm thinking...WOW! Exactly 25 years! Boy, I think I can almost declare myself an Idahoan. But my family is British and I grew up in Louisiana around lots of other Brits so I still think I'm a little bit of a mutt. Those of you who have been around awhile may remember when I used to blog all the time. My opinions weren't very accepted and there was always an issue because I work for the county. That really wasn't fair because I NEVER blog at work! And I am still entitled to my opinions and thoughts about city and county issues, right? However, it stirred a lot of pots and those pots certainly can make a lot of noise! Since I'm a writer, I took what I wrote in my blog seriously so I spent a lot of time researching things which got exhausting to do when you're not even get a paycheck for it. So I stopped. That was a blessing to many! However, to this day, I still have people stop me and ask me why I wasn't blogging and t! hey missed it. I've missed it. Mainly because there are so many issues that come up and I have no voice except around my friends and I'm sure they are tired of it.
Recent posts
Archives 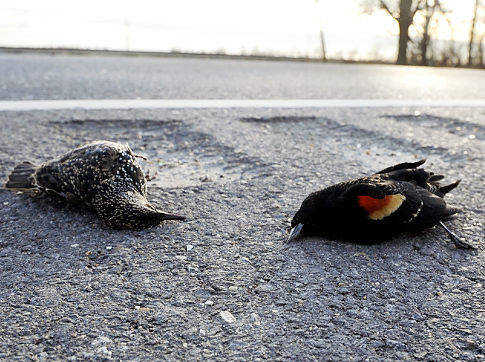 What the heck is going on? Though the scientist keep telling us that large numbers of birds dying or fish dying happen all the time, most people agree that this is not as usual as they want us all to think that it is. If this was such a usual occurrence, then why have these occurrences been so widely reported? Is it because it happened on and just after New Years Eve? The first report made me pause a moment but the next report and the next report certainly made me think twice about it being normal. Afterall, you can't help but wonder what "blunt --force" caused all of these birds to die mid-air? A cloaked alien spaceship? Can't help but wonder what the heck is going on.

"Religious fears of the world's collapse are not the only theories emerging from the recent slew of animal deaths. Government cover-ups are also being fed, including the theory that the High Frequency Active Auroral Research Program known as HAARP is behind the death of the birds." The Alaska-based facility states it is used to conduct ionospheric research, but is often blamed for causing earthquakes and storms and is described by some as a super-secret weapon operated by the government

"That's been a popular one for the last two decades," said Dr. Michael Shermer, publisher of Skeptic magazine and a columnist for Scientific American. "It naturally generates paranoia, it's like Area 51." Article by By Michael Sheridan

"Personally, I definitely do believe we're in the End of Days, and I believe there is a lot of evidence of that," Steve Wohlberg,an author and theologian who has written several books about the end of the world, told the Daily News.

"On the Earth today, there's a lot of violence, and a lot of corruption," Wohlberg said. "Indicators are flashing that there's a storm ahead of us."

Interesting theories will abound around the world, while plenty of "scientist" will assure us that all is well, no need to fear. Actually, there's nothing unusual about that, now is there?