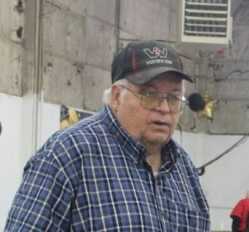 Monte V. Goodloe, age 69, of Grand View, passed away at home, surrounded by loved ones, on Saturday, September 24, 2022, after a long illness.

The family moved to Denio, Nevada from Homedale, Idaho when Monte was 4 years old. He attended grade school in Denio and graduated High School in Crane, Oregon.

Monte was a Jack of All Trades, cowboying for 3 years in Denio after high school. In 1973, at the age of 21, he moved to Grand View, to work for Simplot Livestock Company. At Simplot, he had many duties: Cowboying, driving water truck, and eventually ended up driving semi-trucks. He received an award for driving one million miles for Simplot.

Monte officially retired after 47 years with Simplot in 2020. But Monte couldn’t keep from working and continued to work part time driving truck until health issues kept him from it.

Graveside Inurnment Service for Monte will be held on October 11, 2022, at 11:00 am at the Bruneau Cemetery in Bruneau, Idaho. Luncheon will immediately follow at the Bruneau Legion Hall.

Cremation is under the care of Rost Funeral Home, McMurtrey Chapel.