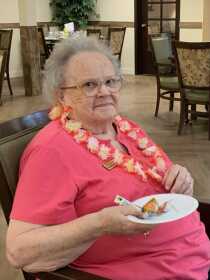 Rosalie Mack LaFontaine slipped in to the comforting waiting arms of Jesus on the evening of Tuesday, July 26th.

Rosalie was born on May 18th 1930 in Twin Falls, Idaho to Walter and Hazel Mack. She had four siblings growing up, two brothers Orion and Lloyd, and two sisters Melba and Phyllis. While growing up on the farm in Twin Falls, she met a dashing young man named Charles. They made a loving commitment to each other and got married on June 19, 1949 and were married for 57 years until Charles passed away on November 30, 2006. 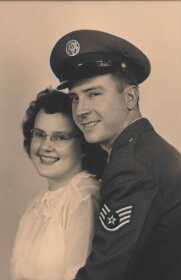 Rosalie stayed in Mtn. Home until 2016, developing many friendships over the years. In 2016 she moved to Boise to be closer to Stephen and Linda (probably to keep an eye on them). She lived at Chateau de Boise from 2016 until her passing.

Rosalie had an infectious smile and laugh, upbeat attitude, and a giving heart. She was always taking pictures, sending birthday cards, and letters to her family and friends. She loved quilting and building friendships. She was an avid Iris grower, and at one time had reached over 500 different varieties in her yard in Mtn. Home.

Rosalie is survived by her daughter Linda and son Stephen; her sister-in-law Rosie; her nephew Robert, nieces Karen, Joni, Ruth, and Treva.

She was preceded in death by her parents, husband Charles, brothers Orion and Lloyd, sister-in-law Elma, sisters Melba and Phyllis, and nieces Allison, Jenny and Kathy.

A viewing will be held from 1:30 ñ 2:30 on Wednesday August 3rd followed by a private graveside gathering. A memorial service will be held at 3:00 p.m., on Saturday, August 6th at the Alden-Waggoner Funeral Chapel to celebrate Rosalies life and blessing family and friends over the years.