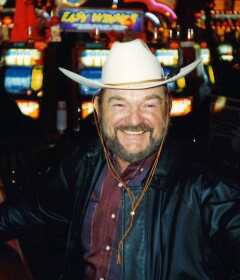 With a broken heart I am letting friends of Philip Wells know that he passed away on June 21, 2022 at age 84. He left his worn out body in the arms of Della, his adoring wife and best friend of more than 50 years. Phil was born in Mountain Home, Idaho on April 24, 1938, the 13th of 14 children to Allen Clay Wells and wife Alta. He grew up in Pine, a tiny rural community and attended a one room schoolhouse. Phil's family moved to the "city" when he went to high school where he graduated with Mountain Home High School's class of 1956. Even while working 2 jobs, he excelled in school and was a Civil Air Patrol Cadet who was honored to be chosen to attend a Congressional dinner in Washington DC. After graduation, he joined the Air Force. As in his other endeavors, he shined and following an extensive screening process, he was among only a handful who were selected to participate in an elite USAF Intensive Course in the Chinese Language at Yale University. Pretty impressive for a kid raised in the backwoods.

Phil's spirit continues on in his 2 living sons, Philip Wells Jr and wife Ruta of Oregon and Wayne Wells and wife Carla of Washington. It weighed heavily on Phil's heart that he was predeceased by his son & business partner, Charles Wells of Rainbow, CA and his daughter, Sherri George, of Twin Falls, Idaho. Their loss was softened by the priceless legacy they left behind comprised of 8 beloved grandchildren and their spouses and 16 precious great grandchildren. Son Chuck had 6 children: Granddaughter Lisa with husband Harold and their sons Wyatt & Jack, Granddaughter Kristie with husband Lee and their sons Cody & Connor, Grandson Karl and children Jacob, Hans, Denver, & Thomas, Granddaughter Jennifer and husband Blake and son Stanley, Granddaughter Sally and her husband James and children Ace, Clementine, Adelaide, and Charles, and the youngest of those 6, Grandson Andy. Daughter Sherri had 2 children: Granddaughter Ashleen and children Milo, Oliver, and Molly and Grandson Allen and wife Shantya. Phil experienced tremendous joy when interacting with, teaching, and guiding those grandchildren and "The Greats" (as he collectively referred to the great grandchildren) who form our future generations. He was very proud of the exceptional parents that our grandchildren and their spouses have become. He felt that because of them and other American families like theirs, there is hope for the future of our nation that he so loved.

Phil tried and mastered many entrepreneurial pursuits in his adult life, including having a high producing Wonder Bread truck route, being a restaurateur (owning as many as three at one time), making from scratch and selling the best Pizzas in the world, being a miner with 7 dump trucks and pup trailers (he never did anything half way), becoming an electronics master, designing and manufacturing satellite dishes, and successfully owning and operating AAA Star Satellite with his son Chuck. Phil enjoyed being a private pilot, Country music, playing the steel guitar, astronomy, politics, watching TV, hunting trips, deep sea fishing, being a redneck, going on cruises and RV trips, conversing on any subject imaginable, imparting his extensive knowledge and wisdom to anyone who would listen, and the pursuit of knowledge and answers to the unknown.

Phil has been referred to by many who knew him as "the smartest man I know!". Anytime someone had a question regarding almost any subject, the response was always..."ask Phil". He had that rare combination of extreme intellect balanced by old fashioned common sense that enabled him to fix almost anything or solve almost any problem he was presented with. Those attributes coupled with a quick wit and an outrageous sense of humor made him a particularly compelling man.

Phil was a self proclaimed spiritualist with deep faith and was ready to go "home" and begin plans for his next grand adventure. He left indicating that he had had a wonderful, diversified life and had done everything he had wanted to do. He was dearly loved and will be deeply missed until we see him again. Soar high my love and watch over us!