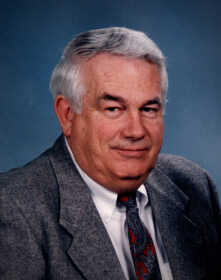 John was born to J. Willis Clark and Dorothea (Guss) Clark, November 23rd, 1937, in The Dalles, Oregon. He was the oldest of three children.

John moved frequently as a child, attending close to 13 elementary schools. His family finally settled in Middleton, Idaho. John had fond memories of playing basketball for Middleton High School and graduated in 1956. He then attended Northwest Nazarene College in Nampa, Idaho, where he received a BA degree in business in 1960. He served in the National Guard for nearly a decade, retiring from service in 1964.

John married Connie Hill on September 5th, 1959, at College Church of the Nazarene in Nampa, Idaho. John and Connie had six children. They lived in Boise from 1960 to 1973. Then they moved to a farm north of Middleton where they raised cattle and grew crops including alfalfa, wheat, corn, and pinto beans. In 1989, they moved to a farm south of Mountain Home where they lived until they retired in Eagle in 2007. John owned and operated many businesses including: Burger Chef, Gem State Pest Control, Clover Hollow Farms, and Crystal Springs Ranch.Besides farming, John was a lifelong businessman and had great interest in acquiring real estate investment properties. He also served on the Central Idaho Advisory Board for US Bank in the late 1990s through the early 2000s.

John enjoyed hosting pheasant hunting parties at their farm in Middleton. He liked to go boating at lakes and reservoirs around Idaho. John also enjoyed taking his family to basketball games at Northwest Nazarene College. During the 1970s and 1980s, John especially looked forward to taking his wife, Connie, to college basketball games across the Northwest. He also loved watching Boise State football games and attending the Fiesta Bowls in 2007 and 2010. John regularly traveled to Scottsdale, Arizona, in the wintertime with his wife, Connie. He enjoyed telling stories about his various jobs that he had as a young adult such as getting up early to run his paper route, selling insurance and cookware, and working a summer for the U.S. Forest Service following high school. John would often share memories of fighting fires up in the wilderness near McCall, Idaho. This experience with the U.S. Forest Service was a real highlight of his life.

John is preceded in death by his wife, Connie Clark (May 2014); his son, James Clark (May 2021); sister Roberta Horton (October 2013); and his parents, J. Willis Clark (Sept. 2003) and Dorothea Yanda (May 2000). He is survived by his brother, Paul Thomas (Tom) Clark of Lewiston, ID, and children: Marilyn Clark of Mtn. Home, ID; Scott Clark of Eagle, ID, Jay Clark of Middleton, ID; Camille (Jerry) Harris of Caldwell, ID; and Judy (Bryan) Appleby of Meridian, ID. He is also survived by 10 grandchildren.

There will be a drop-in viewing and visitation at Cloverdale Funeral Home, 1200 N. Cloverdale Road, Boise, Idaho, on Friday, January 14th, 2022, from 6pm-8pm. The funeral service will be held on Saturday, January 15th, 2022, at 1pm at Tree City Church, 3852 N. Eagle Road, Boise, Idaho. Burial services will be immediately following the funeral at Middleton Cemetery, 23660 Cemetery Road, Middleton, Idaho.

In lieu of flowers, the family asks that donations be sent to the Dorothea Yanda Scholarship at Northwest Nazarene University, 623 S. University Blvd., Nampa, Idaho 83686.