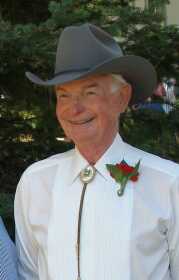 Herbert Ralph Vann, 91, of Mountain Home, passed away at his home on Sunday, November 7, 2021. A graveside service with military honors will be held at 11:00AM on Monday, November 15, 2021, at Mountain View Cemetery.

Herb was born February 4, 1930, in Dothan, Alabama. Herb was the fourth of eleven children to Porter and Josie Vann.

At the age of 17, Herb joined the US Air Force. He was stationed at several bases, but the life changing base turned out to be Mountain Home Air Force Base, where he met his future wife Lavonne at a dance on base. After a brief 6-month courtship, they were married at the First Baptist Church in Boise on May 21, 1950. This was the day following Lavonne’s High School graduation. After a couple more transfers to different bases and Herb’s honorable discharge, they returned to Mountain Home and raised their two children, plus they adopted anyone else the kids drug home.

Summertime Herb and his family were permanent weekenders in Featherville at the family cabin. Herb loved time in Featherville fishing, hunting, exploring or just sitting in the back yard watching the river go by. A labor of love began the summer of 1976 when Herb and Lavonne built a log home replacing the old cabin.

Herb was a member the Masonic Lodge #30, El Korah Shrine, volunteered with Camp Wilson BBQ, past member of the Boise and Nampa Lions Clubs and once served on the board for the Salvation Army. He enjoyed volunteering and giving back to his communities.

Herb is survived by his son Steven and his wife Cinda Vann of California, daughter Joni and her husband Allan Harris of Mountain Home, triplet grandkids Alexis, Allie and James Vann as well as step grandkids; Chris (Spring), Jason (Jessica), John, Mindy (Juan Nunez), and 13 step great-grandkids. He is also survived by his sister Doris (Ron) Williams, and brother Jim (Nancy) Vann. He was preceded in death by his wife of 64 years Lavonne, infant daughter Shoni, one sister and seven brothers.