We Are The Mighty | By Blake Stilwell 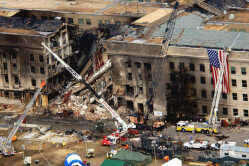 An aerial view of the damage at the Pentagon two days after Sept. 11, 2001. On that day, five members of al-Qaida, a group of fundamentalist Islamic Muslims, hijacked American Airlines Flight 77, a Boeing 757-200, from Dulles International Airport just outside Washington and flew the aircraft and its 64 passengers into the side of the Pentagon. (Air Force photo by Tech. Sgt. Cedric H. Rudisill)

Max Beilke was in the Army for 20 years already by the time he deployed to Vietnam in 1972. His time there would be much shorter than the many others who did tours in the Vietnam War. His last day in Vietnam was the U.S. military’s last day in Vietnam. What made his last footstep on Vietnamese soil so unique was that it was captured on tape for the world to see.

On March 29, 1973, Master Sgt. Beilke was given a rattan mat before he boarded a C-130 bound for home. The giver of the gift was Bui Tin, a North Vietnamese observer, there to ensure the last hundred troops at Saigon’s Tan Son Nhut Airport left as agreed. Back home, his family watched live as the man they loved, drafted to fight in Korea in 1952, headed for home from the next American war.

His service didn’t stop when he landed back in the United States. Beilke retired from the Army and, in the next phase of his life, he worked to support American veterans. Eventually, he became the deputy chief of the Retirement Services Division, with an office in Virginia. But it was part of his duties that brought him to the Pentagon on the morning of Sept. 11, 2001.

Beilke was meeting with Lt. Gen. Timothy Maude and retired Lt. Col. Gary Smith. Just as they were sitting down to begin talking, United Airlines flight 77 hit the outer ring of the Pentagon. The three men never knew what hit them. They were all killed instantly. Traces of their remains could only be found through DNA tests on the disaster site, according to the Beilke family.

Max Beilke was 69 years old. Three months later, his remains were interred at Arlington National Cemetery. The man who had survived the ends of two American wars was one of the first casualties of a new one, the longest one in American history. He left behind a legacy of gentleness and fondness for everyone who met him – including the North Vietnamese colonel sent to ensure he and the other Americans left Vietnam.

According to his biography on the Pentagon’s 9/11 Memorial site, he traveled extensively for his work and ended every presentation with the same Irish blessing,

“May the road rise up to meet you. May the wind be always at your back. May the sun shine warm upon your face, the rain fall soft upon your fields and, until we meet again, may God hold you in the palm of His hand.”