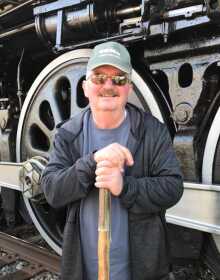 Russell Dereld Baxter was born in SLC on September 22, 1950, the fourth child of Dereld and Irene Baxter. Russ graduated from Mountain Home High School in 1969. During the Vietnam War, he served with the Army Corps of Engineers in the Panama Canal Zone.

After the Army, he returned to Mountain Home and got a job with Mountain Bell. In 1983 he transferred to Montpelier and built a home in Dingle, the second of 6 homes he either built or remodeled. After 25 years he retired from Qwest in Mountain Home in 2004.

Russ loved to serve. He was a Reserve Officer for the Bear Lake County Sheriff’s Office, a member of the Bear Lake Translator District, the Library Board, and helped organize the Bear Lake Music Festival.

Services are under the care of Rost Funeral Home, McMurtrey Chapel.