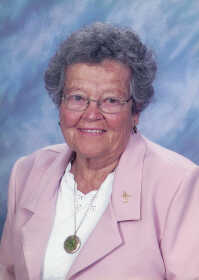 Geraldine (Geri) Jeanette (Zink) Covey (age 94) passed away on December 5, 2019. Born in Council, Idaho, March 10, 1925, to Vollie V. and Edith (Lakey) Zink, she graduated in 1942 at 17 from Council High School. That year the family moved to Boise for work. There she joined the Civil Air Patrol and went to work at Gowen Field as a sheet metal riveter repairing war-damaged B17s and B24s during World War II. She was one of the last “Rosie the Riveter”-type heroines of our time.

When the war was winding down, she took flying lessons but was later distracted by a young soldier (Walter E. Covey) returning from the Pacific Theatre. Walt became the love of her life and they were married February 5, 1946. They were blessed with three children: Larry, Sue and Mike.

In 1950 they moved to Mountain Home and enjoyed working, neighborhood card games and the Sagebrush Shufflers Square and Round Dance Club. Family gatherings, dancing, camping, and fishing were some of their favorite things to do.

Geri was baptized in 1953 in the First Christian Church (present-day Christian and Baptist Church).

Geri and Walt truly loved their life together of nearly 55 years.

She was a very loving and caring person. Always a smile, always a hug, always a kind word to say, Geri made this old world brighter in her own special way.

A “Celebration of Life” service will be held at Rost Funeral Home, McMurtrey Chapel, on Saturday, August 8, 2020, at 10 a.m. Masks are required.