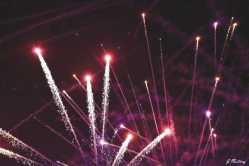 Mayor Sykes, Councilmen Bundy, Stokes, McCain & Brennan, as well as MHPD Chief Conner, Officer Dack and MHFD Chief Moore met on Monday, June 29th, during a special City Council meeting to discuss the 4th of July celebration for Mountain Home, which none of them seemed to take lightly. Also in attendance via phone conference was a CDH representative to answer questions and give guidance on the on-going COVID-19 situation as it affects Elmore County. Reports from CDH showed the number of increased cases for Elmore County as a concern, with daily cases going from one to two to five to 13 and positive cases doubling in the last two weeks. CDH reported that St. Lukes Elmore has an increased amount of testing being done as well as the positive cases being a concern with their specific capabilities. The MHAFB recently heightened their level of restrictions due to positive cases for the base, resulting in a "stay in place" order and essential travel only.

The main topic of conversation revolved around the fact that due to the abundance of municipalities around the city of Mountain Home cancelling Independence Day Celebrations, the possibility of there being an influx of people commuting to Mountain Home would be likely resulting in a higher possibility of visitors exceeding the local guidelines. The fact that Elmore County is a neighbor to Ada County, considered a hot spot in Idaho, reporting 700 new cases just last week according to CDH- weighed heavily in the decision. The CDH representative also expressed the fact that people have a hard time meeting or attempting to follow recommendations of social distancing of 6 feet and wearing mask in public settings and large groups in any circumstance.

Mayor Sykes wanted it clarified that many more people need to be infected in order for antibodies to be developed as explained by the CDC. They explained that herd immunity in this case is not realistic, with CDH guidelines suggesting in the state of Idaho the population of 1.7 million would require 1.2 million to be infected and this is simply not a realistic solution. The first question we must all ask is are the hospitals capable of handling this influx of cases without jeopardizing healthcare readiness statewide. With larger gatherings of individuals, numbers have been doubling weekly. In the case of Elmore County and its limited bed space those individuals would continue to be sent to Boise where the valley is already at a reduced hospital availability with the recent increase in cases.

Mayor Sykes commented that even with statewide guidance, and many guidelines not observed, "when do you throw up your hands and rely on common sense to prevail.” The representative commented by saying COVID fatigue is real and people want to socialize. The more we let our guard down, the more the risk and no one is happy about making those decisions for the masses when it comes to restrictions and the canceling of community events. The messages relayed are not popular and the more lax the orders become, the more cases are reported and continue to increase. Vaccines can take 2-5 years to develop and it will take some time but CDH was confident that "it is not forever.” For now this is "our new normal" leaving hard decisions to be made by state, local and political leaders no matter how unpopular they might be.

As the councilman and those in attendance listened to the situation effecting our own community locally, they had much to consider in their final decision. Suggestions and compromises were offered freely for consideration with emphasis on safety and manageable conditions for the community with the amount of visitors who could possibly show up. Chief Moore reported on the surrounding communities that have already cancelled the fireworks displays and the Mayor reported on the amount of calls City Hall has received asking "are you still having yours?" The idea of requesting attendees to stay in their vehicles was discussed and so was the amount of available parking. Asking for social distancing guidelines and the ability to enforce these requirements were all discussed. The possibility of doing a show using half of the available $27,500 investment in pyrotechnic products. Because of the lack of available fundraising possible for next year, with the inability to recoup those lost collections due to COVID-19 and the inability to collect funds. Neither the Mayor nor Council wanted it to reflect back on the Fire Department or the "streetwalker" group after the outstanding job the group has done with displays that the community has come to love and appreciate over the years.

As it was time for a decision to be made, due to the amount of preparation that would be needed to be done before this weekend the council called for a vote. Councilman Bundy made the motion to suspend the 4th of July fireworks display and look at "forecasting" a September 11th Patriots Day celebrating Firemen, Police Department and First Responders with a fireworks display. This would give the city more time to devise a plan for the fireworks display the community deserves. Councilmen Daniel Brennan and Brad Stokes voted Nay while Councilmen Matt Bundy and Mike McCain voted yay. Mayor Sykes broke the tie with a yay vote emphasizing community safety and CDH guidelines.