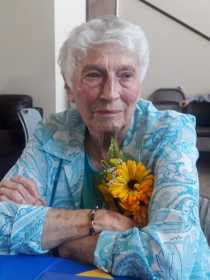 Jo Wright at the age of 92 passed away of natural causes at her home June 15th at 7 A.M., with her son Clay Wright by her side.

Jo was born April 5, 1928 in Pueblo, Colorado to Lucille (Tipps) McKnight and Sheldon McKnight. Lucille later married Lawrence Amy and became Lucille Amy. Jo meet and married Clair Wright on December 25, 1952, they honeymooned in New Orleans, Clair and Jo first moved to Mountain Home while he was in the Air Force. He was discharged January 8, 1955, shortly after on January 10 their son Clay was born in the hospital on Mountain Home Air Force Base.

Following this event Clair became employed at Martin Marietta again working on a nuclear rocket engine. They transferred to Conway, Arkansas then Las Vegas, Nevada and they returned to Mountain Home after the death of Jo’s mom. Joanne was mostly a homemaker with the exception of being a telephone operator and bookkeeper for various business. Clair and Jo bought a sheet metal shop then expanded it to also include a Harley Davidson dealership, which became C&C Harley Davidson, a Mountain Home fixture.

The Wrights owned and managed C&C Harley for 17 years and then afterwards retired and traveled to Europe and became snowbirds frequenting Arizona. On a trip to Arizona Clair passed from heart failure. They enjoyed the many adventures and road trips they took with friends that were like family. They mentored the younger generation and always offered a helping hand and advice. Jo returned to Mountain Home with the help of her son, and shortly after got custody of her grandson Russell.

She spent a lot of time raising him, getting involved in scouts, helping him and many other boys earn merit badges in Scouts and ferrying them and camping equipment around, and helping with fundraisers. She helped Russell purchase his first automobile, a truck. She even helped him learn to drive a stick shift, which drivers ed did not at the time. Jo had a remarkable love for animals and taught Russell the responsibility of dogs. She also taught him to be honest and to take responsibility for his actions.