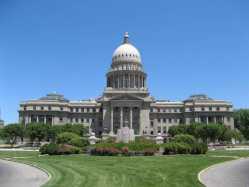 BOISE, Idaho (AP) - A reporter for a Boise television station who covered the Idaho Legislature and attended recent news conferences held by Gov. Brad Little said he has tested positive for the coronavirus.

Joe Parris of KTVB-TV said Wednesday he was tested on March 24 and was told Tuesday he had the virus.

Parris covered Little's press conferences on March 16 and 18 along with other Statehouse reporters, who intermingle with the state's 105 lawmakers. The Legislature adjourned March 20 due to coronavirus concerns, opting not to stick around for possible veto override votes.

"It wasn't until the weekend after that I developed a cough, and then I self-isolated," Parris said.

He said he had no symptoms the final week of the Legislature, and avoided shaking hands and kept his distance from people in hopes of avoiding the virus. He said he's not sure where he picked it up. He hadn't been to Blaine County, a hot spot in the state for the virus.

Parris said he initially thought he had the flu, but he said it turned out to be a worse experience. He's now recovered.

Little's spokeswoman, Marissa Morrison, said the governor was well and working Wednesday, but she and a co-worker were self-isolating because they had contact with Parris at the news conferences.

Also Wednesday, Idaho Secretary of State Lawerence Denney said the state will mail out absentee ballot request forms for the May 19 state primary to every registered voter who hasn't already requested an absentee ballot.

Denney said about 500,000 request forms could be mailed out under an order made Wednesday by Gov. Brad Little, who didn't attend the news conference, citing a busy schedule.

"We expect quite a number of people have already requested an absentee ballot," Denney said.

Little and Denney announced Monday that the state primary would be conducted by mail with no in-person voting due to the coronavirus. Idaho has 524 confirmed cases of the virus and nine deaths, according to a Johns Hopkins University tally on Wednesday afternoon.

Denney said they will accept ballots two weeks past the May 19 primary date, with results released on the evening of June 2.

Also, Denney said, the deadlines to register to vote and request an absentee ballot have been moved to May 19 under Little's order. Ballot's must be received by 8 p.m. June 2.

He said there appears to be enough federal aid that the request forms sent by the state will include return postage so voters can mail them back without having to buy stamps.

Denney said the state isn't simply mailing out absentee ballots because officials need to know whether a voter wants a Republican or Democratic primary ballot.

The state primary includes a U.S. Senate seat, both U.S. House seats, and all 105 seats in the Legislature.

Denney has said the change to a mail-in primary only is necessary because officials at many of the facilities used for the 900 polling places told county clerks the facilities won't be or may not be available for the May election. Denney also said polling place workers have concerns for their health and the health of voters.