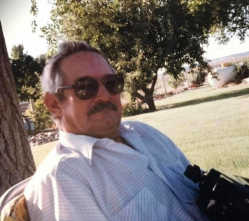 Robert Alexander Meyers 84, passed away March 27, 2020 from a long illness at The Cottages in Mountain Home.

Robert was born June 15, 1935 in Greeley, Colorado, the son of Alex and Alma Brooks Meyers. He married Joyce Rockhold Meyers, and they had 3 daughters. He graduated in Lingle, Wyoming in 1954 with 2 scholarships to Laramie University in Laramie, Wyoming. He loved fishing, boating, hunting and 4 wheeling and was a master electrician. He loved his family dearly and was loved in return.

Robert is survived by his wife Joyce Meyers, of Mtn Home, his daughters; Sherry Bates (Bob), Lori Meyers, and Dr. Tammy Fouse (Bob), his brother Cecil Meyers of Grand View, 4 sisters-inlaw; Dolores Lowe of Guernsey, Wyoming, Gail Rockhold of Cheyenne, Wyoming, Cherry Meyers and Ila Meyers of Grand View, 4 grandchildren - Jason Lawrence (Trudy) from Sheridan Wyoming, Erika Bates of Coeur d' Alene, and Gage and Mady Fouse of Pocatello, and 1 great-granddaughter in Pocatello. He also had many nieces and nephews that he loved . He was preceded in death by his parents, and his brother, Ray Meyers

Memorial Service will be held at a later date. Cremation is under the care of Rost Funeral Home, McMurtrey Chapel.