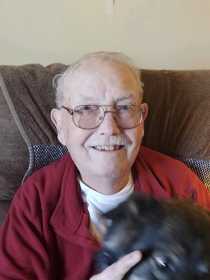 Donald Stewart Thoen, 80, a former longtime resident of Mountain Home, passed away surrounded by love and family, on December 30, 2019, at Bingham Memorial Hospital in Blackfoot, due to complications related to age.

Born November 5, 1939, in Amarillo, Texas, to Donald Lund Thoen and Maurine Elizabeth (Stewart). Don lived his younger years in Amarillo until moving to New Mexico State University where he received a degree in history and mathematics. He used his degree to educate hundreds of students during a long career at Mtn. Home Air Force Base Jr. High and Mtn. Home Sr. High School teaching music, math, electronics and physics. Though he wouldn’t admit it, he enjoyed his career as an educator, and talking with past students always gave him pleasure. While in college, Don excelled at playing first chair French horn in the band. There he met Nancy Louise Kelly, and in December of 1967, the two were married at the Mtn. Home Air Force Base chapel. They divorced later, in 1990, and he never remarried.

Prior to moving to Idaho, Don served two tours of duty as a Lieutenant (j.g.) in the United States Navy aboard the USS Rupertus (DD-851) during the Vietnam war. Duties included monitoring surveillance aircraft and cryptography. Later, after moving to Idaho, Don transferred to the Idaho Air National Guard based at Gowen Field in Boise, Idaho. There he continued to work with surveillance aircraft by developing and interpreting photographs taken by the EF-4 jets stationed there. After 20 plus years of service, Don retired in 1985 with the rank of captain in the United States Air Force.

Besides family, the one interest that Don was obsessed with was trains, particularly the Santa Fe Railroad! Any trips he took, with or without family, needed to include a stop at a railroad museum, tourist site or just to marvel at a preserved locomotive. He was forever acquiring model trains and memorabilia. Always planning to build a large HO gauge model railroad layout, but never quite getting there.

Don was also a member of the First Congregation Church in Mtn. Home for approximately 50 years. He participated in and later directed the choir and bell choir. He especially relished the Christmas season multi-denominational concerts that are performed each year.

The Masonic bodies of Idaho was another of Don’s lifelong pursuits. He joined the Order of DeMolay during his teenage years later rising to lead many of the Masonic organizations for which he belonged including, but not limited to: Past Worshipful Master of Elmore Lodge #30 A.F.&A.M. (1978) in Mtn. Home, Active Legion of Honor for the Order of DeMolay (1998), Grand Royal Patron of Idaho Order of Amaranth (2005), Past Commander of the Twin Falls Commandery #10 Knights Templar, served the Grand Commandery of Idaho as Right Eminent Grand Commander (2009-2010) and was awarded the Knight Commander of the Temple by the Grand Encampment Knights Templar, USA.

Don was preceded in death by his parents Maurine Elizabeth (Stewart) and Donald Lund Thoen, twin brothers who died at a very young age, and numerous aunts and uncles.

As per Don’s request, cremation has taken place. A celebration of life will be held from 11AM to 2PM, on Saturday, February 15, 2020, at the First Congregational Church in Mountain Home, Idaho. Special thanks to the Women’s Fellowship for catering and to the Grand Lodge of Idaho for providing funeral rites at the celebration.