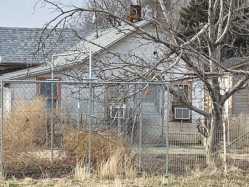 The property at which Schweikert and the 58 animals were living was quickly condemned by the City of Mountain Home after being deemed uninhabitable.

On Dec. 26, the Mountain Home Police Department executed a search warrant at 77 N.W. Jerome Street in an investigation of alleged animal neglect. Upon discovering large numbers of dogs being kept in unsanitary conditions, the Idaho Humane Society was contacted to assist in the case.

Due to concern over potentially toxic levels of ammonia from urine and waste present in the home, Mountain Home firefighters donned hazmat gear and wore oxygen masks until the home could be aired out enough that rescue workers from the Idaho Humane Society and Mountain Home Animal Shelter could begin removing animals.

According to KTVB Mountain Home Fire Chief, Mark Moore, said when he entered the home it was full of animal feces.

55 dogs and three cats were removed from an approximately 700 sq ft. home. The interior of the residence was littered with debris, and found to be heavily contaminated with feces and urine.

The pet owner, Kathleen Pamela Schweikert, was booked into the Elmore County Jail on Dec. 26 and was charged with 58 counts of animal cruelty and her bail was initially set at $17,400.

MHPD said she also broke three city ordinances: having more than three dogs, not having a kennel license and not licensing her animals.