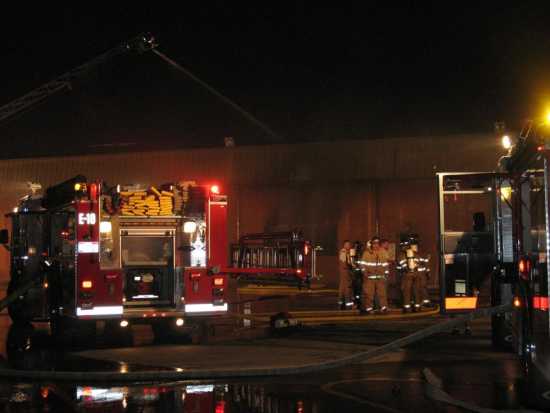 A firefighter was injured Monday evening after a fire tore through the Elks Lodge in Mountain Home, completely gutting the building.

Fire crews responded at about 9:45 p.m. to the blaze after flames were seen pouring out of windows on the south side of the building. The fire quickly spread through the ceiling and roof before firefighters drowned the flames, extinguishing the fire.

A team of firefighters had entered the interior of the building to knock down the ceiling inside with long axes when a light fixture broke loose, hitting firefighter Brian Reed in the head, knocking him unconscious.

Fellow firefighters Chuck Van Meer and Mitch Prouty pulled Reed outside where medical crews evaluated him before he was transported by air ambulance to Boise.

Reed was treated for a minor head injury and released from the hospital early Tuesday morning.

Fire Chief Phil Gridley explained, "We never put firefighters on the roof because of the danger of them falling through. These guys were taking out the ceiling when Brian was hit behind his right ear. It knocked him out cold."

"A RIT (Rapid Intervention Team) was quickly assembled to respond to the injury but the other guys already had him outside, " Gridley said.

Based on a preliminary investigation, Gridley determined the fire was caused by a burning plastic trash receptacle, possibly from still smoldering cigarette butts disposed of earlier in the evening, that had caught fire and caused two circuit breakers to malfunction, one in the walk-in cooler near the bar and in an electrical receptacle under the bar counter.

More than 50 percent of the building was charred, according to Gridley, and it is likely that the entire building will need to be rebuilt, with a damage estimate of $700,000-$800,000.

Local Elks President Lynn Fincher said that the facility had been booked solid with events through the end of the year.

"We are going to do what we can to help people who had events scheduled to find another place, " Fincher said.

The Lodge typically hosts hundreds of events each year, ranging in size from 10-319 people and is one of the few venues in the city capable of serving large groups.

"We will go on. The Elks will be here. We are thankful that there was only one injury," Fincher said.

The Elks Lodge started in Mountain Home in March 1963 and occupied a building downtown until June 1977, when the lodge moved into its current facility at 325 S. 3rd West. St. They have approximately 350 members.

The Elks meet on the second and fourth Tuesday each month and until further notice, meetings will be held at the Best Western hotel meeting room.

Comments
View 6 comments
Note: The nature of the Internet makes it impractical for our staff to review every comment. Please note that those who post comments on this website may do so using a screen name, which may or may not reflect a website user's actual name. Readers should be careful not to assign comments to real people who may have names similar to screen names. Refrain from obscenity in your comments, and to keep discussions civil, don't say anything in a way your grandmother would be ashamed to read.
Respond to this story