Sharing the Beauty
Jessie Miller
I am interested in this Community, County, and the beautiful state of Idaho. Most of my photos will be in Idaho, but from time to time, they will be my vacations aay from Idaho. You'll see lots of my Children and Grand children, along with others in my family. Of course there will be horses and horse related things, and things I photo'd horseback.
Recent posts
Archives

shhhhhhhhh…….Don't tell anyone, but Jilly took a few days off school last this month and went to the San Jacinto with us. It will likely be her last time this year, as it will just get colder and colder. Wetter and wetter. She's tough, and she loves it, but might as well leave the misery to another time. She'll have plenty of that, I"m sure.

In some ways, she had to be pretty tough this trip anyway. I took her to meet up with Wayne, and so it was up to me to make sure we had what we needed. Horses had to be picked up by a semi here in Mountain Home, so I took them to a place where they could load into one of those huge cattle trailers and hitch their ride there. I managed to get that done well enough, but I also managed to leave Jilly's saddle at home, in the trailer. LUCKILY I remembered it by just about Hammett. Some not very nice words rumbled around in my head, as I turned around (probably legally …. probably) and headed back to get it. I tried to make myself feel better by asking Jilly "You could just ride bare back for a few days couldn't ya?" She was not convinced. So….. back home to get the wayward saddle. And off again! I consoled myself that I'd only gone 18 miles or so, much better than never realizing I'd left it.

These first photos are just one morning as the sun was fully up …. I love the way the sun makes the landscape all crazy saturated color and all. 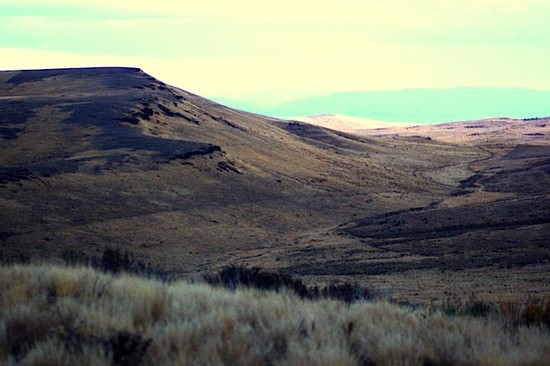 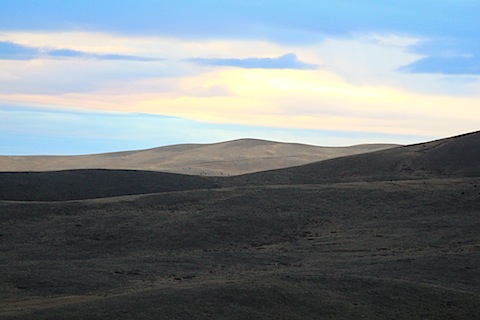 Looks like a happy girl huh? The little girl in pink chaps too! This is the new pink chinks debut horseback. I bought them this last summer, and she hasn't had much call for them til now. But what they are good for, is rain slides off them quick, rather than soaking into your jeans. Not to mention that PINK and PURPLE is just a good thing on the trail anyway. What girl doesn't agree?

Here is where I have to point out that this is NOT her saddle. So, not only did I nearly forget it, I went back and grabbed the wrong one. We bought 2 that are nearly identical. This one is is mostly Al's, and has longer stirrup leathers…. and while Jilly can ride it for the most part, it isn't "hers" and for long days, up steep hills and down, some quick movements that might happen, it's nice to have a saddle that you consider yours. This Grandma was sorry to have somehow grabbed the wrong one. One other thing that "we" (Jilly and I) forgot, was Jilly's spurs. Marshmallow really LIKES to take it easy, and sometimes little legs just need a bit of help. For this trip, Marshmallow had an iron deficiency. Jilly had to work for everything they got done, but she was up to the challenge. 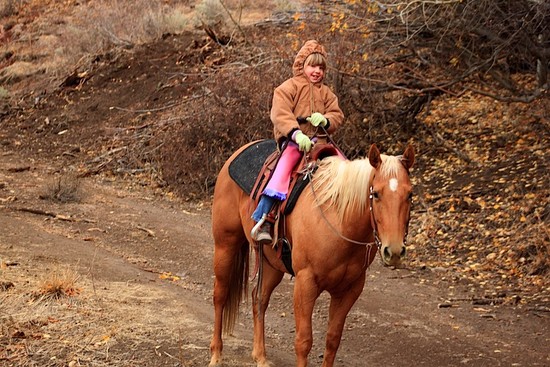 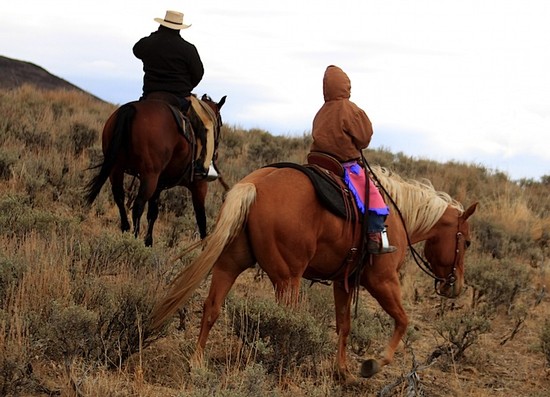 Jilly found this dog way out in the literal middle of Timbuktoooooo. Obviously, it's a Great Pyrenees. We never went by any sheep, but there are known to be some out there, and the sheep herder has this type of dog. We found out later that someone gave this dog to the Sheep herder, but the dog wasn't raised to be a guard for the Lamb, so he wandered. Naturally, he latched on to Jilly. And Jilly latched on to him. He wasn't as big as some I've seen, and lacking much facial expression. When she and I first came upon him, I walked my horse up to him first, to make sure He "got me first" and gave Jilly a chance to run. Heheheheh He didn't look aggressive at all, but not partically friendly. Just kind of like he looks right here. This photo I took shortly after we came upon him. I tried to 'shoo' him away, only to hear Jilly prattling away to him. She called him "Flake" Any guess why? 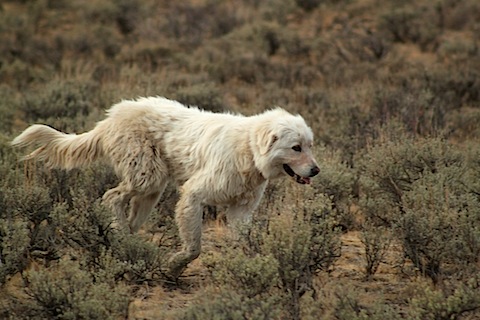 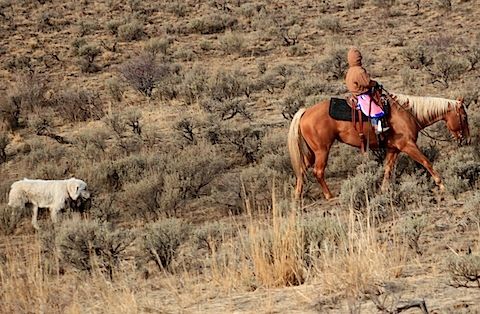 This is a reminder to Grandma that this is not her saddle. Every now and then, she had to hang off the side of the saddle to make it settle back in the middle. Obviously, someone rides a bit to one side, or something, but I thought it was cute to see her hanging like a Monkey off the side of her saddle. 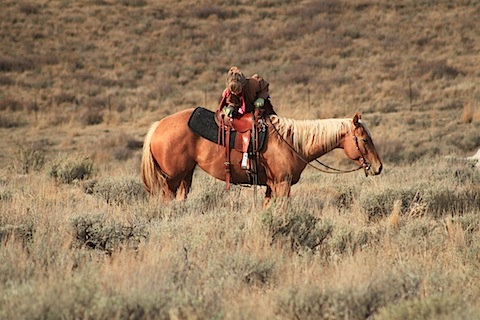 This is one of our Pups, Penny …. getting ready to tell a sour cow "What For" 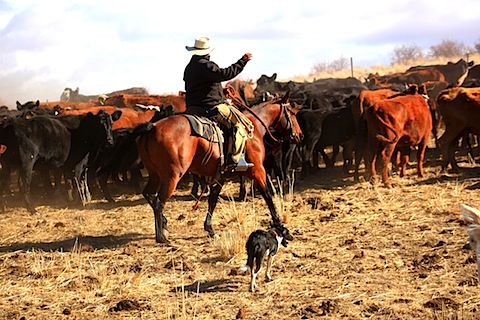 Penny has a Flake for a helper today. She's far too busy to pay much attention 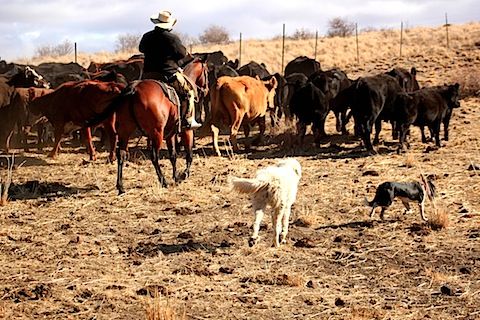 This Cow thought she could bully Penny, but Penny showed her that size doesn't count for much, when you're determined. She is in her own kind of Heaven, when she gets to work a cow. 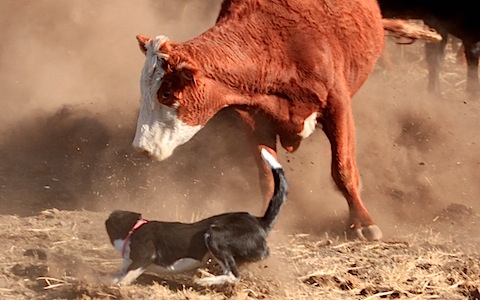 She LOVES being able to turn a cow around. It's make anyone feel powerful. 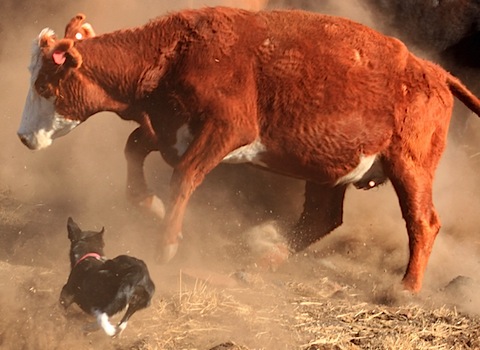 Talk about Powerful. How do you suppose a 7 year old girl feels when she rides along a ledge like this, and can look back where she just rode, and known she kind of has the world in front of her. Looks to me like she can conquer just about anything. I'll make sure she keeps that feeling as best I can. I wish every kid in the world could see a sight like this, from the back of a horse, and know "I did that" 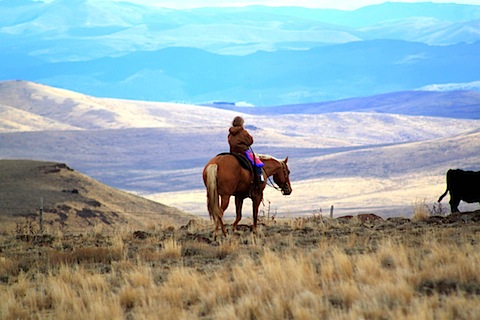 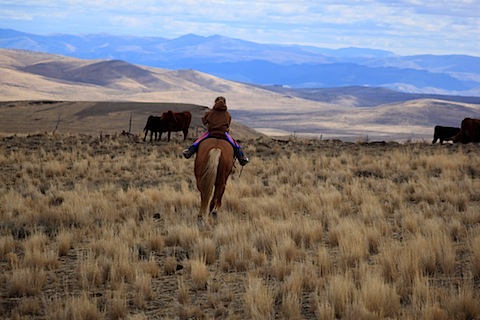 She was up a hill in front of me, and when I looked up and saw this sight….I pulled my camera out again. The sun was hitting my Golden Children just as it appears in this photo. The skies were getting ready to let loose, but the sun hadn't give up the battle yet. I keep my camera in my coat, with the strap hanging around my neck. It's not always easy taking care of it, and sometimes I think I"m stupid for packing it around with me, but this shot reminds me why I take it. 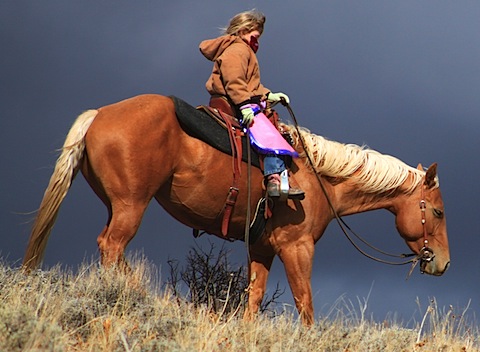 She is riding along sooo comfortably here. hunkered down into her coat, arms down by her side….. reins hanging loose on a content horse. Yep, this is life at it's Golden Moment. 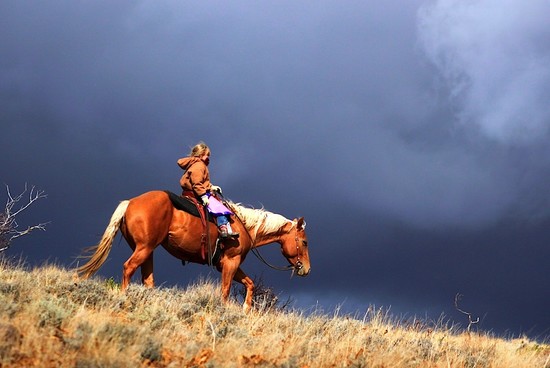 This is what life is about.

Comments
View 11 comments
Note: The nature of the Internet makes it impractical for our staff to review every comment. Please note that those who post comments on this website may do so using a screen name, which may or may not reflect a website user's actual name. Readers should be careful not to assign comments to real people who may have names similar to screen names. Refrain from obscenity in your comments, and to keep discussions civil, don't say anything in a way your grandmother would be ashamed to read.
Respond to this blog