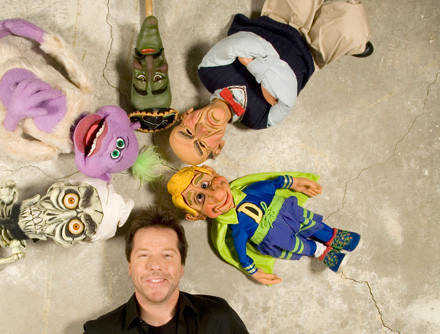 Jeff Dunham who has scored huge success with his live shows "Arguing With Myself", "Spark of Insanity" and the Jeff Dunham "Very Special Christmas Special," recently debuted his new show on Comedy Central to the highest ratings in network history, putting over Chappelle's Show and Mind Of Mencia.

The series is part of a multi-platform deal Dunham signed in March 2009 that includes further stand-up specials, DVDs, a consumer product partnership, and an upcoming tour.

On the Jeff Dunham show, the show combines segments with Dunham and his characters onstage in front of a live audience with segments where the characters visit real people and places around Los Angeles.

In the pilot episode, Walter and Jeff visit a licensed psychologist to help them with their personal conflict, Bubba J visits a real rifle range, Peanut meets pop singer and reality TV star Brooke Hogan, and Achmed stars in a stand-up comedy DVD.

Hopefully, this show doesn't come to a sudden end like Chappelle's Show but at least it is way more funny and original than Mind of Mencia.

Jeff Dunham made his debut on the Tonight Show with Johnny Carson in 1990, after his set Dunham was invited to sit on Carson's couch, a mark of approval by Carson.

Dunham appeared with Walter in a 1996 episode of Ellen, playing a ventriloquist attending a convention in a hotel meeting room that was also booked for the wedding of Ellen's friend. Dunham also appeared with Walter in a TV commercial for Hertz. His other appearances include 60 Minutes II, Fox Sports Net's The Best Damn Sports Show Period, Hollywood Squares, Entertainment Tonight, Good Morning America and the WB's Blue Collar TV.

On July 18, 2003, Dunham's appeared on Comedy Central Presents, his first solo appearance on Comedy Central. During his half hour piece, he showcased Peanut , José Jalapeńo on a Stick, Walter and an early version of Melvin the Superhero Guy.

As of March 2009, Dunham has sold over four million DVDs, and received more than 350 million hits on YouTube, making him one of the most-viewed entertainers of all time. Spark of Insanity received the best reviews of any DVD on Amazon.com in 2008, and A Very Special Christmas Special was the most-watched telecast in Comedy Central history, with its DVD going quadruple platinum (selling over 400,000) in its first two weeks. Forbes.com reported that Dunham was one of the highest earning comics from June 2008 to June 2009, earning approximately $30 million during that period.

Walter is a retired, grumpy old man with arms always crossed in discontent. He has a brash, negative and often sarcastic view on today's world. He is a Vietnam War veteran and a former welder, and "doesn't give a damn" about anyone, especially his own wife and certain audience members.

Peanut is a purple-skinned "woozle" with white fur covering most of his body, a tuft of green hair on the top of his head, and one red sneaker on his left foot. Dunham explains in Arguing with Myself that Peanut is from a small Micronesian island, and that they met in Florida. Peanut's humor is not based on a particular motif or stereotype, as those of the other characters, and is more like "the bad kid".

Jose Jalapeno on a Stick

José is a talking jalapeńo pepper on a stick who wears a small sombrero. José, who speaks with a thick Latin accent, is typically paired with Peanut, who often makes fun of José, uses appeals to Latino stereotypes when doing so, and makes fun of his being on a stick.

José also appears in the movie Delta Farce with Jeff Dunham, credited in the movie as "The Amazing Ken" was is forced to provide entertainment for the movie's villain Carlos Santana.

Bubba J is a beer-drinking redneck that Dunham describes in Arguing with Myself and A Very Special Christmas Special as "white trash trailer park", and uses Bubba J for humor that centers on stereotypes associated with that group.

Dunham appeared in a guest role with Bubba J on NBC's sictom 30 Rock, playing a ventriloquist named Rick Wayne and his dummy Pumpkin from Stone Mountain.

Dunham introduces Sweet Daddy Dee in Arguing with Myself as his "new manager". He calls himself a "pimp", which he says stands for "Player In the Management Profession."

Also referred to in Spark of Insanity as The Superhero: Melvin, Melvin wears a blue superhero costume, and is used to poke fun at superheroes.

Achmed is the skeletal corpse of an incompetent suicide bomber. He is used by Dunham to perform comedy based on the contemporary issue of terrorism. He is known for yelling, "Silence! I kill you!" to Dunham and people in the audience who laugh at him.